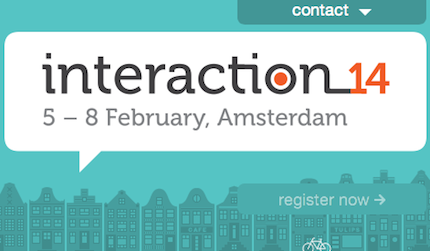 Next year Interaction14, the top interaction design conference will be in Amsterdam, the second time it is in Europe (after Dublin in 2012).

Now the website is live. And it is responsive (works great on a smartphone).

Participate and be a speaker or workshop chair. Register (starts 10 June). Or simply be inspired, as he theme this year is “Languages of Interaction Design”. Writes Alok Nandi (the conference chair):

“We see language in several contexts. There is spoken language, body language and written language. There is an interface language between user and system. Other languages include the jargon we use to discuss our work and the tools that we use to do our work.

By enhancing the â€œLanguages of Interaction Designâ€ we create new ways to view interactions between people and things. Of particular interest is extending the context from urban to mobile screens and from immersive to sensor based environments.”

and be inspired by Amsterdam:

(Disclosure: I am involved with the event organization)

Videos online of the SDGC conference 2020