The Italian newspaper La Stampa reports today on its front page that Venezuelan president Ugo Chávez is launching an 18 euro ‘phone of the revolution’.

Because this story doesn’t seem to be reported in the English-speaking press, here is a quick translation from the (somewhat juicy) Italian:

Good things come in three with Chávez. After the 2007 launch of the “Bolivarian laptop”, and the “Simón Bolivar” telecommunications satellite launched last October, the Leader Máximo of the Venezuelan petrodollar economy has just announced its latest jewel, which will go on sale on 24 May: the Vergatario (a trusted and successful person in Caracas slang), a mobile phone that marks a real and proper revolution.

Its price in fact, as announced by the Telecommunications Ministry, is unbeatable: only 50 bolivars, or 18 euro. “The Vergatario is practical, small, light, resistant, impermeable and sealed,” assures the president on the television. As was the case with the other two launches, also this product turns its back to the technology of the hated “gringo empire” of Washington: the gadget is instead relying on a contribution by the Chinese.

The mobile phone, which is called the “ZTE 366”, uses the ZTE high-technology developed in China, which has already been inserted in about 100 million telephones.

In a country where each year 7 million (imported) telephones are sold, Chávez made another joint-venture with the Chinese, who are of course very interested in accessing the oil of the “Fidel Castro of Caracas”: the creation of a mixed private-public Vetelca company (Venezuelana di Telecomunicaciones), based in the Venezuealan Paraguanà peninsuala, which will be 85% owned by the Bolivarian Republic and 15% by the Chinese.

The new plant, which will assemble the revolution phone, was created with big numbers in mind: an anticipated production of 600,000 Vergatarios this year, and a million next year. This way Chávez, who is financially tight because of the falling price of the crude oil that he exports, can prevent a further money drain to pay for the mobile phone products currently made in USA, Japan or Europe.

But there is more. Not only has the Chavista government – through its State operator Movilnet – already ordered 100,000 units of the new Venezuelan object of desire to be distributed for free in the poor and rural areas of the country, but the “Fidel Castro of Caracas” also wants to send his Vergatarios to friendly countries including the Bolivia of Morales, the Nicaragua of Ortega, and – obviously – the Cuba of Raul Castro. 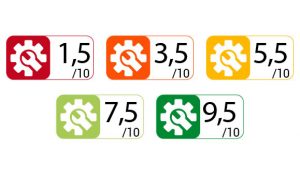 One year on, has the French repair index kept its promises?